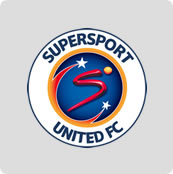 We shared the spoils this evening with Supersport united in the ABSA Premiership. Although not full points, it was a well fought for away point at the Mbombela Stadium.

Supersport came out on the attack from the first minute and had us playing a defensive game as they attacked from all angles.

We showed great determination to deny them and handled their attacks on the wing well. They created a number of chances but once again our final line of defence stood strong with the back four; Mathiane, Sibisi, S.Dube and Lunga putting their hands up when called on.

The rest of the team also did their bit when needed defensively.

On the counter, we created a number of chances, but none of the resulting shots were enough to rattle Williams between the sticks.

It was only in the last 15 minutes of the game that the Supersport keeper felt pressure after a call from Coach Komphela to attack hard.

This resulted in a great shot from substitute Danny Venter, who had Williams diving to his left to get fingertips on the shot, deflecting it to the woodwork.

Minutes later he was in the action again tipping another shot over the bar to deny us.

After a long stay in Nelspruit, the side return to Durban as preparations switch to our Sunday game against Mamelodi Sundowns at Sugar Ray Xulu Stadium.