A confident Diski side beat SuperSport United at Sturrock Park in the Multichoice Diski Challenge.

The win sees us add another 3 points on our lead at the top of the log at the moment, with second places Bloem Celtic facing AmaZulu tomorrow at King Zwelithini Stadium.

The youngsters took the game to their hosts from the fist minute, and went on the attack straight after SuperSport got the game underway.

Clear intentions from the side, that they were looking for the win and nothing would stop them in their quest to bring back the 3 points from the game.

The attacking play paid off for us in the 20th minute when Conco scored off a cross from Jappie. Sabelo then increased the lead just 2 minutes later after S.Parusnath won the ball in the middle, made a telling switch to Sabelo who made no mistake in finding the back of the net.

We went onto the break with the two goal advantage and the confidence of the players was evident in their determination coming back onto the field.

Jappie was then rewarded for his work on the field as Conco layed the ball off to him in an unmarked position, which allowed him to tap the ball in and get the third for the day.

SuperSport had a few good moments of play. But, outstanding work from our back four frustrated them. The hosts resorted to trying anything to get into the last third, and on one occasion played a high ball into the box. Dlamini fouled a player and the referee awarded SuperSport a penalty. Stoffels made no mistake and scored for the home team.

The home side fought hard to get back into the game, but were just not able to find their rhythm and did not have it in them to break our defence again.

An outstanding outing from the team who once again displayed a solid performance. 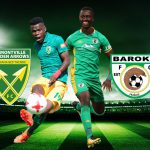