Getting our second away win for the season against Platinum Stars gave us a bit of momentum going into our game against SuperSport United. And created a positive vibe in the camp that carried through to our game.

We knew it was going to be a physical challenge as our opponent play a very direct game, we were not wrong and had definitely prepared for the game we expected.

Defending as a team and then creating chances at the other end was how we intended to score and would be our biggest asset in order to get 3 points.

Again we had the better of the possession and this allowed us to create chances in the 1st half to score but couldn’t convert any of our chances.

However, we were not disappointed going into the break with both teams scoreless.

In the second half, We had to increase our efforts to get that elusive goal and the strategy we had decided on allowed us to do exactly that. Playing with all our attacking players from the start meant we had enough to get that goal and we did through Ntuli in the 64th minute.

After all the pressure we put on SuperSport, we had the reward to show for it. I am only hoping that all the chances we never took will be saved for the remaining two games we have against Amazulu and Orlando Pirates.

We live on to fight another day and continue our quest for survival. 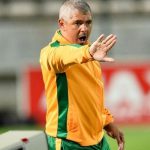