We have lost to a strong Sundowns side in Pretoria tonight. A first half penalty gave the home side the game.

The first half saw Mamelodi Sundowns putting pressure on us from the kick off, getting into the last third. They controlled the game from the start and put us in a defensive position for the greater part of the first 45.

They were quick on the ball and came from both sides of the net with Tau and Vilakazi posing a threat. Sirino also missed an early opportunity as he hit the upright early on.

The opening goal came off a penalty shot though as Nkombelo could not mange to pull out of a tackle on Vilikazi and bought him down in the box.

Nascimento stepped up to the penalty spot and waited for Mbaeva to commit before connecting the ball and making no mistake in scoring.

We did not manage to get into the last third as much as we wanted. A play up the far side saw Venter get up only to be closed down by Sirino, and even from our set pieces we never looked dangerous enough.

Returning in the second half, we took the game to Sundowns in the first 10 minutes of the second half. Our attempts though could just not get into a position to get a clear shot on goal.

Masandwana then again had a period of dominating play. Mabaeva had a number of brilliant saves in the second half and kept us in the game for the second stanza.

With Mutizwa, Ndwandwe and eventually Sibiya coming on in the second half. We looked to add a little more speed onto the field. It did not allow us to play into any advantage though.

Our chances were few, and were also denied a penalty as Mutizwa was taken down in the box.

A tough result tonight, and this means a week of hard preparation as we host Kaizer Chiefs next week Tuesday at Princess Magogo Stadium. 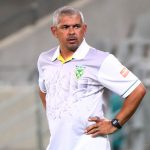