A resurgence in play in the last 10 minutes of play was not enough to pull back an equaliser against a determined Baroka FC this afternoon.

After having started the game confidently this afternoon and taking advantage of some well executed plays with Conco heading up the attack, we forced errors from the visitors and won a free kick.

Cele took the set piece, played a fantastic ball into the box that Lamola managed to get a header on and flick past Chipezeze for the lead. This set up a good 30 minutes of attacking play that saw us use the ball well, getting behind the defence and putting pressure on their goals.

Chipezeze did well to deny us a number of shots and then set a counter play us that saw Dickens equalise just 10 minutes before the half time break.

Baroka took the lead just two minutes after returning from the break as Vusi Sibiya rose to meet a free kick and headed it past Gumede.

We had a number of attempts at goals. Conco had a shot which was well defended by Chipezeze. Sibeko then managed to get into position and unleash a shot, but came up wide.

Coach Larsen then substituted both Sibeko and Sibiya, looking to change the angle of attack with the introduction of Venter and Mutizwa.

The dynamics of the game changed a bit, but strong defending and unconvincing attacking plays saw us suffer another loss at home.

We have another lengthy break until December when we return to the field to face Kaizer Chiefs at home on the 1st. 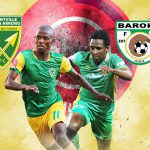