Our Diski side have lost another away game today against a 10 man Polokwane City at Old Peter Mokaba Stadium.

The first half of the game saw the feisty home side reduced to 10 men a number of minutes after they failed to take the lead off a penalty.

This did not dampen their determination to secure a win, and they fought valiantly to ensure that we did not get the opportunity to take the lead.

Their keeper, Meschak Radebe, stood as a pillar between the sticks and denied us shot after shot to keep his side alive.

We dominated possession, but Polokwane played quick and precise counter moves that put us on the back foot as they tried to force the errors.

In the second half, they managed to pull off a well executed counter, get in behind the defence and create an opportunity.

Mlungwana made no mistake in the 83rd minute, securing the home win for Polokwane City.

We return home and have 2 weeks to prepare for our Diski Derby match against Maritzburg United at Harry Gwala Stadium on October 7th. 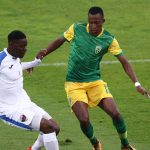