We have played to a goalless draw with Orlando Pirates tonight at Orlando Stadium.

We created a number of opportunities in the first half with Phiri narrowly missing a chance in the 13th minute and then Conco and Sibeko managed to get shots away.

A minute before half time, Sibiya lined up a free kick on the edge of the box, but fired it straight to Mpontshane.

The Buccaneers enjoyed possession in the first 45 but failed to find penetrative passes as our defensive players managed to close down the majority of their plays.

Orlando Pirates came out firing in the first couple of minutes in the second half. They put pressure on our defence and kept us on the back foot, having to defend on both sides of the park as Lorch and Pule attacking the goals.

We used our counter attack well and had an opportunity when Sibeko had a header from a flick on. Again Mpontshane made the save and kept the game goalless.

Lamola was introduced off the bench to attempt to change the game for us. It had limited affect for us as we failed to use the change of pace to our advantage.

A solid performance from our defence tonight, and good execution of Coach Larsen’s game plan. But we just failed to convert the chances again to secure full points from the encounter.

We return to Durban and will prepare for our weekend game at home against Black Leopards on Sunday at 15h30. 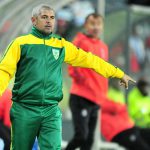