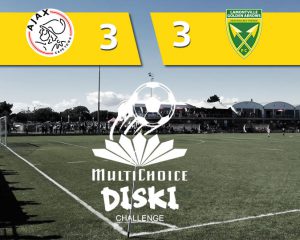 This mornings Multichoice Diski game delivered all that a top of the table clash should as we ended up sharing the spoils with Ajax Cape Town in a 6 goal thriller.

Ajax opened the scoring in the 9th minute off the boot of Traore after they did well to beat our defence on the left and open up enough space to get into a scoring position and making no mistake in doing so.

We found ourselves on the back foot a bit but showed determination in fighting back and playing up into the last third. We created a number of opportunities, but we just were not able to finish as cleanly as we would have liked to.

There were moments when we lacked concentration at the back, with Sibisi trying to plug holes in the defence. He managed to close the gaps at stages, but again in the 37th minute Ajax managed to break through and a well placed kick into the top of the net by Phohlongo saw the home side take the lead.

We managed to pull a goal back in the dying minutes of the first half as S.Parasnath scored from a free kick after Khwela was fouled outside of the box.

Both teams returned showing determination to score again in the second stanza. We worked well and created a number of scoring chances, but were just not able to get the edge on the opposition.

A change on the field saw Sibiya replacing Falakhe and he bought the injection of energy we were looking for. Just minutes after coming on he was involved in a play that saw him equalise for us.

This put the fight back in the side, and allowed us to play back into the game. An end to end battle ensued and in the 79th minute we took the lead off a goal from substitute N.Dube.

With just 10 minutes to play for we needed only to ensure that the hosts never scored. But, as promised Ajax bought the game to us. Putting pressure on in the last 3rd. In the dying minutes we conceded a number of free kicks on the edge of the box and managed to clear two.

But it was in the last minute of additional play that we conceded again, allowing Losper to equalise for the hosts.

An exciting game from both sides.

We will return to Durban and prepare for our next game against Orlando Pirates on the 18th of February at King Zwelithini Stadium. 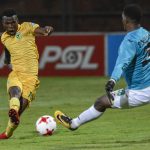