I don’t think Sundowns expected us to play the way we did in the first half where we tried to be on the front foot and tried to play offensively. I thought playing (Danny) Venter a bit deeper as a playmaker worked and it improved our build-up play.

I was very proud of the performance. Yes we could have done a bit better by closing (Sibusiso) Vilakazi down on the edge of the box with the first goal, but besides from that I thought the players did very well.

In the second half we conceded a goal because we lost possession on the edge of the box and good teams are going to punish you if you lose the ball in those areas.

It is a learning curve for the players, but I thought it was a huge improvement on our last match in terms of the team performance, so it is a step in the right direction.

There are lots of positives to take from this game. 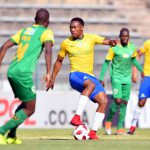